North Cumbria Independent Living (NCIL) is a service provided by Eden Housing Association who is successfully running a 24 hour response ‘Independent Living’ service in Eden. In the last two months they have been busy setting up a new Carlisle office at the Heysham Gardens Extra Care scheme and have been recruiting a new staff team to cover Carlisle and surrounding areas. A number of staff have been recruited from Riverside Careline.

Kath Hetherington, Development Manager for both Eden and North Cumbria Independent Living said “We’ve been in daily contact with Careline to make sure the transfer of clients is as smooth as possible and we are pleased to be able to announce that we have taken on 9 staff, 6 of whom have joined us from Careline. It’s a pleasure to be working with a team that has such breadth of experience and training, right across the care and support sector.”

The North Cumbria Co-ordinator is Dennis Milner who has moved across from our Eden office and also has 5 year’s previous experience working at Riverside Careline. He was joined in the office on the first day by NCIL Responder Tracey Cowell who also had years of experience at Careline and she will be familiar to many of the people NCIL are supporting.

The NCIL Response car is fully equipped to deal with most emergency situations, with essential equipment like defibrillators, lifting cushions and first aid kits.

Commenting on the transition, Kath added “We are pleased that over 80% of the Riverside Emergency Response clients have chosen to transfer to our service. There has been a lot of work organising the transfer, that includes individual client visits and regular communication to reassure them of continued service.

“On behalf of the NCIL team, I’d like to express my thanks to the Riverside Careline staff who, throughout the whole process, have been keen to ensure clients receive an uninterrupted service.”

Anyone looking to find out more about the North Cumbria Independent Living Service can contact the team at Heysham Gardens, Carlisle on 01228 580909 or Freephone 0800 061 4201 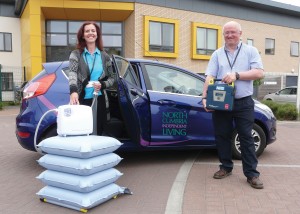 Eden Independent Living was set up almost four years ago by Eden Housing Association to provide care, support and additional services like the handy person service, decorating and gardening. It has grown considerably and extended the range of services it offers. Merging at the beginning of 2016 with Eden Community Alarms, they are members of the Telecare Services Association (TSA).