Volunteers at the heart of Eden Independent Living

This week is the 32nd Annual Volunteer Week, celebrating the support given by more than 21 million people across the country. At Eden Independent Living (EIL) based in St Andrews Square, Penrith, it is volunteers who have played a vital part in the success of the organisation.

Kath Hetherington, Development Manager for the EIL service said “We’re currently supported by 20 volunteers who are a shining example of how people can make a big difference to communities. In Cumbria there are over 50,000 volunteers who make a financial contribution to Cumbria of around £28.5million per year. Our volunteers enabled us to deliver an efficient and effective alarm service and all share similar characteristics, wanting to make a difference, having a great sense of purpose and knowing their contribution is of value.

“Most of our volunteers have been with us for years when we were Eden Community Alarms. They’ve stayed with us as we developed into the wider Eden Independent Living Service and it’s also reassuring to see we are still attracting new volunteers who work on reception and as visiting volunteers checking on alarms and clients. Eden is a sprawling district so we have volunteers working from as far as Alston, Appleby and Kirby Stephen then right across to Keswick and Low Hesket.”

Reception volunteer Dianna Holliday has always been active so ten years ago, when her family needed less help at work, she chose to volunteer at Eden Community Alarms. Dianna said “Mum benefitted from the Eden Community Alarm service and really appreciated the regular check-up visits which were done by volunteers; they were always supportive and friendly and the alarm service is like a reassuring blanket for clients and their families, it’s great to be part of that team.”

Sheila Hutchinson is one of the EIL ‘visiting volunteers’ and has been out and about in the community for eleven years – it’s a job she continues to enjoy. “I like meeting people so it’s a great role for me. We make regular visits to check on the equipment, ensuring the pendants and back up batteries are fully operational. There are clients I’ve seen for years so you do get to know them quite well.”

With thirteen years’ service, Barbara Manton is one of the longest serving volunteers on reception. She has noticed a difference since merging with Eden Independent Living. “The phones are very busy and it’s no longer just alarm enquiries, we’re also getting a lot of calls about the handy person service, the gardening and aids for daily living.”

The newest volunteer recruit has only been with EIL since February. Brian Hardy retired two years ago and is a proud member of ‘The Old Codgers Club’ raising money for charity. He was looking for something meaningful to fill his time and saw a notice in the EIL window asking for volunteers. Brian said “My wife still works so it was an opportunity to do something useful. It’s easy to give a couple of pounds to charity, but a lot harder and a greater commitment to be a regular volunteer. There’s a lot more going on here than people may imagine and there’s a steady flow of people coming through the door, every day is different.”

Unusually, Volunteer week has been extended by five days as a celebration of Her Majesty the Queen’s lifetime of service to more than 600 charities and organisations to which The Queen acts as a Patron. There are parties planned across the country and as part of their annual thank you to the volunteer team, Eden Independent Living is hosting a lunch at Mrs Millers Tearoom, Culgaith, a rare opportunity for all the volunteers to get together at one time.

Anyone interested in finding out more about volunteering at Eden Independent Living should contact the team on 01768 890657. 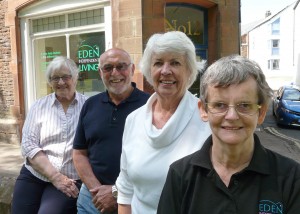